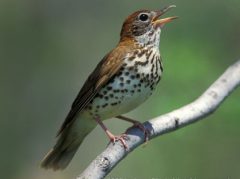 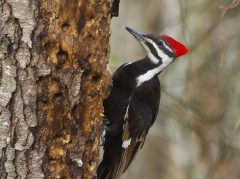 Birds • Walk quietly and listen. You may hear the sharp drumming or raucous call of the magnificent Pileated Woodpecker, which may grow up to 19″ long. The bright red flash of its crimson crest and angular black and white wings confirms you have spotted the Pileated the largest of our woodpeckers. Throughout the Irvington Woods are large oval holes left in dead or dying deciduous trees by Pileated Woodpeckers which feed mostly on wood-burrowing insects. You might observe these birds high up in the trees, feasting on the sun-seeking small white berries of poison ivy vines. Listen also for the haunting flute-like notes of the shy Wood Thrush. This spotted brown bird lives deep in the Irvington Woods where it feeds on insects under the leaves on the forest floor, as well as seasonal berries of the native Spicebush, Virginia Creeper and deep purple Pokeweed. 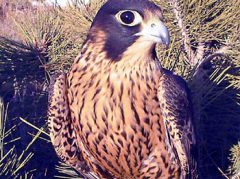 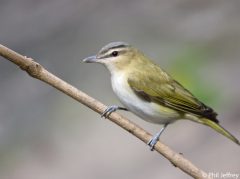 The conversational chatter of the Red-Eyed Vireo might also grab your attention. The Red-Eyed Vireo sings from dawn to dusk as it nibbles on forest insects and berries and fruits. Keep an eye out as well for the aerial acrobatics of the Peregrine Falcon. Once endangered by pesticide poisoning, the Peregrine Falcon is returning to our area. The Peregrine, which feeds on smaller birds, has been clocked up to 200 mph when diving to catch its prey in flight! Other birds common to this habitat include Red-Tailed Hawks, Sharp-Skinned Hawks, Goshawks, Wild Turkeys, Great Horned Owls, Great Blue Herons, and Egrets. 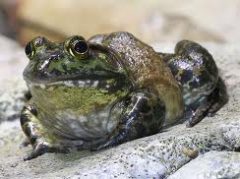 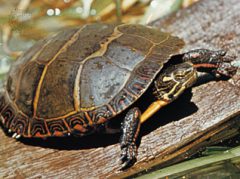 Frogs and Amphibians • In the early spring you might hear the chorus of spring peepers, Northern Green Frogs and the American Bullfrog as they socialize at Marshall Pond or the Hermit’s Wetlands. Listen carefully to see if you can pick out their distinctive calls, the high-pitched Peeper, the twirring of the Green Frog, and the low throb of the Bullfrog. Once quite common, the Spotted Salamander is now a rare and delicate treasure that you might be lucky enough to find under a rock or a rotting log in a wet area, or in moist leaf litter.

Reptiles • Watch out for the brightly colored Painted Turtle sunning on a log in Marshall’s Pond. In the spring you might come upon the Box Turtle laying eggs in the open field above the reservoir or in soft, warm dirt along the waterline. Look carefully on the ground and you’ll be able to find Garter Snakes and Rat Snakes. 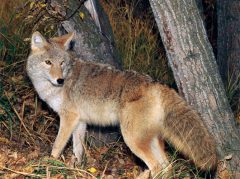 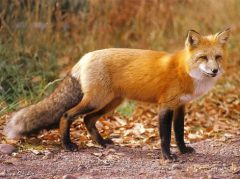 Mammals • Be on the lookout for many mammals living in the woods including coyotes, red foxes, White Tail deer, chipmunks and Gray squirrels.

*By Shenandoah National Park from Virginia CC BY 2.0 via Wikimedia Commons