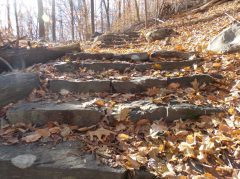 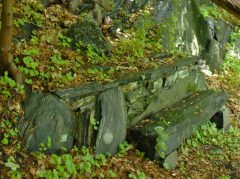 Parcels of land from several 18th and 19th century estates can be found in the Irvington Woods. They include the homes of Cyrus W. Field, a successful businessman and financier who created the Atlantic Telegraph Company and laid the first telegraph cable across the Atlantic Ocean in 1858; Philip Schuyler, a Revolutionary War general and kinsman of Alexander Hamilton; and Isaac Stern, one of three brothers who founded Stern Brothers Department Store in 1868 in New York City. Throughout the woods are remnants from these estates, including stone terraces, benches, steps and walls. Several of the trails within the system were initially carriage roads for these estates. 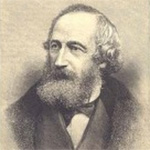 Cyrus W. Field was the entrepreneur who spearheaded the plan to lay a 1,250-mile cable under the Atlantic Ocean, providing the first telegraphic communication between America and Europe. As the head of a paper company, he amassed wealth that was used to finance his idea, which he began to pursue before the Civil War. Field persevered despite enormous difficulties and several failed attempts, completing the project in July 1866. The U.S. Congress recognized his efforts and awarded him a gold medal. Field’s 780-acre estate filled a large portion of the Irvington Woods. He named it “Ardsley,” after his English ancestral home, and resided here from 1868 until he died in 1892 at the age of 72. The plaque commemorating the 1931 opening of Cyrus Field Road remains affixed to a rock formation on the side of the road about 200 yards from the south parking lot. 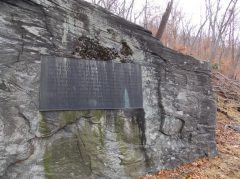 Macy Monument • Tucked behind beautiful rhododendron bushes is a large granite rock with a plaque honoring V. Everit Macy, 1871-1930. V. E. Macy built a successful chain of newspapers in Westchester and was the first Commissioner of Public Welfare. As commissioner, he oversaw the growth of the Grasslands poorhouse complex into the first county hospital in New York, now Westchester Medical Center. While many of his countless acts of generosity went unheralded, his achievements as Superintendent of the Poor and President of the Westchester County Park Commission were widely known. David Rockefeller, Jr. called him “the kindest man I ever knew.” A portion of the 172-acre Macy Park, bisected by the Saw River Parkway and NY State Thruway, lies within the trailway system. 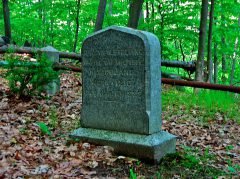 Hermit’s Grave • In 1810 Johann Wilhelm Stolting was born in Heligoland (Germany) in the North Sea. He was well educated and spoke German, Greek, French and Hebrew. Although he was a teacher, linguist, scientist and landowner; at the end of his days he became a recluse, making buttons on a homemade lathe to support his few needs. The eccentric Stolting roamed the streets and woods and bathed in the Saw Mill and Hudson Rivers. In a small shed on his land overlooking the Saw Mill River valley, he slept in his own coffin made of local chestnut wood. Stolting was a fascinating figure, and became known as the Hermit of Irvington. He died in Irvington on January 10, 1888. His is the only marked grave in the village. 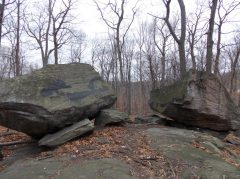 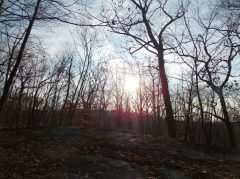 Split Rock • This striking glacial erratic was carried miles to its Irvington home by glacial ice.

Sunset Rock •This site at the top of a ridge is named for its striking sunset views of the Hudson River. Early birds will appreciate its wondrous sunrises overlooking the Saw Mill River Valley. 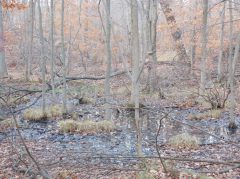 Hermit’s Wetlands • The largest remaining wetlands in southern Westchester, this area is home to many migratory and all-season resident birds, as well as a variety of turtles, reptiles and other water creatures. 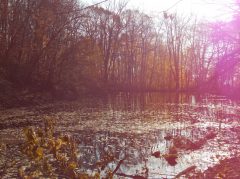 Ice Pond and Marshall’s Pond • These man-made ponds are part of the Barney Brook Watershed. Ice Pond was used to harvest ice for storage in the icehouses on the nearby estates. Before refrigeration, the ice was used to preserve perishable foods.